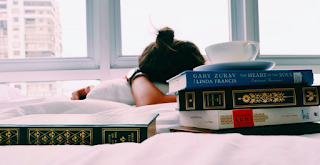 Holly Bourne is one of my favourite authors at the moment & I only thought that it would be appropriate to mention my favourite series by her. 'The Normal' series which currently has the four following books in it.

Amber, Evie & Lottie; three girls facing down tough issues with the combined powers of friendship, feminism & cheese snacks. Both hilarious & heart rending, this is Amber’s story of how painful & exhilarating love can be, following on from Evie’s story in Am I Normal Yet, to Lottie’s determination to change the world with her feminist revelation in What’s A Girl Gotta Do. 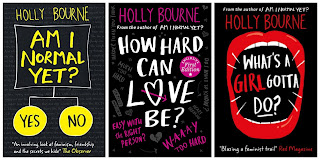 Am I Normal Yet? By Holly Bourne
All Evie wants is to be normal. And now that she’s almost off her meds & at a new college where no one knows her as the-girl-who-went-nuts, there’s only one thing left to tick off her list . . .

But relationships are messy. They can make any girl feel like they’re going mad. And if Evie won’t tell new friends Amber & Lottie the truth about herself, how can they stop her making huge mistake.

How Hard Can Love Be? By Holly Bourne
All Amber wants is a little bit of love. Her mum has never been the caring type, even before she moved to California, got remarried & had a personality transplant. But Amber’s hoping that spending the summer with her can change all that.

And then there’s prom king Kyle, the guy all the girls want. Can he really be interested in anti-cheerleader Amber? Even with best friends Evie & Lottie’s advice, there’s no escaping the fact: love is hard.

What’s A Girl Gotta Do? By Holly Bourne
How To Start A Feminist Revolution;


Call out anything that is unfair on one gender.


Don’t call out the same thing twice, so you can sleep & breathe.
Always try to keep in funny.
Don’t let anything slide. Even when you start to break . . .

Lottie’s determined to change the world with her #Vagilante blog. Shame the trolls have other ideas.

. . . And A Happy New Year? By Holly Bourne
Spinster Club girls Evie, Amber & Lottie are reunited for the mother of all New Year’s Eve parties. Having spent months apart since finishing college, they’ve got plenty to catch up on: how is Evie juggling a relationship with her OCD? Does Amber plan to spend more time with Kyle in America? And where did Lottie end up? Get ready for some serious partying & some major New Year’s revelations from everyone’s favourite cheesy snack loving feminists.

Let me know if you've read any of the books from this series or have any suggestions of good books I should look into reading.