"Don't Let Your Career Make You A Bad Mother" 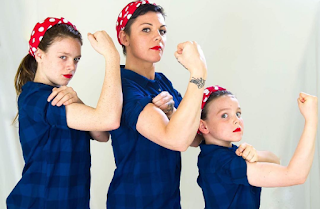 What I'm writing about today is something that really just doesn't sit well with me and I'm choosing to talk about it because it's something that I'm strongly passionate about. I want to point out that I strongly disagree with the woman who wrote this column and the points she made in her piece.

Miranda Devine, an Australian columnist had a piece published in the Daily Telegraph Australia, titled, "Don't Let Your Career Make You A Bad Mum". I don't especially want to give this columnist or the article the clicks but I think it's important for me to talk about it.

I came across this article via a response video by Em Rusciano. Em is a radio host in Sydney, Australia and I'll link the response video here. I love the points she made and the way she represented not just herself, but all women and mothers.

If you want to attack a mother and really hit her at her most vulnerable point, tell her she's made the wrong choice between going to work or staying home with her children. Tell her that her choice will have long term detrimental affects on her children and if you feel like rubbing the salt in the wound just a wee bit more, why not tell her that her choice will destroy society as we know it or that it will put our economy into a spiral of recession. Miranda Devine really laid it on thick with her column, leaving mothers feeling guiltier than usual.

In the column she said that mothers were defined by their families, women who care about their careers are selfish, she said the gender wage gap isn't real and that women prefer to selfishly work and then use IVF by choice.

I'd like to point out that, I am only 18 and not planning to have children until I'm well into my twenties but I know that no one choose IVF. IVF is expensive, painful and invasive. Miranda, the happy child of today is the child who has food to eat, who is housed, educated, and who has unconditional love and support from their family. With the prices of today, it means that families need double income sources, Mums have to work but we don't see the working fathers are bad Dad columns, do we?

Directly quoted from the column, "Young women increasingly are coerced into prioritising careers and becoming feminist warriors against the so called gender wage gap". Again, I'm with Em on this one, most mothers work because they want to provide for their kids and because they appreciate leading their own lives. There is absolutely nothing wrong with mothers putting themselves first because that makes them better mums.

I could talk about this for ages because this kind of thing really frustrates me and I guess that just comes down to the passion that I have behind these types of things. I am going to keep this short and leave it at that but please check out Em's response because she really nail it on the head. I am hundred percent with Em and what she had to say about the column. If you're a mother and have read the column, please do not let it nor Miranda Devine make you feel guilty for making the decisions that are right for you and your family. Just like Em said, you are a good enough mother. There's no such thing as a good or bad mum, you just have to focus on being good enough.

By bonnieellenxo at April 04, 2017
Tags Lifestyle