If you guys follow me on my social media then you'll know that I spent four days in Auckland recently and you may have already seen some of the photos. It's not very often at all that I get to go up there and see my family that live there, so the time I spent up there was very well spent hanging out with family and exploring Auckland a little bit more. 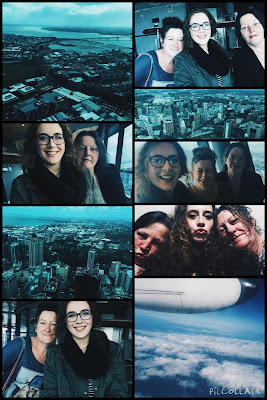 This here is a collage of some of my favourite photos taken over the four days the we spent there!
Obviously I took so many more but I didn't want to post to many and I want to respect family members that were also in many of the photos too.

I had such an amazing time! I got to see parts of Auckland that I had never seen before and really just spend quality time with my family. We went to the Sky Tower and got to see some incredible views, we went for ice cream at a place called Ollie's Ice Cream Parlour, we went out to a little place called Pokeno and we went to see that amazing beach views at a place called Castaways Resort! We spent some time driving around some little communities admiring the amazing houses, they were like castles, they were stunning to say the least! Being able to celebrate my Mum's birthday with such incredible people was amazing and I'm so glad we got to!
By bonnieellenxo at September 17, 2015